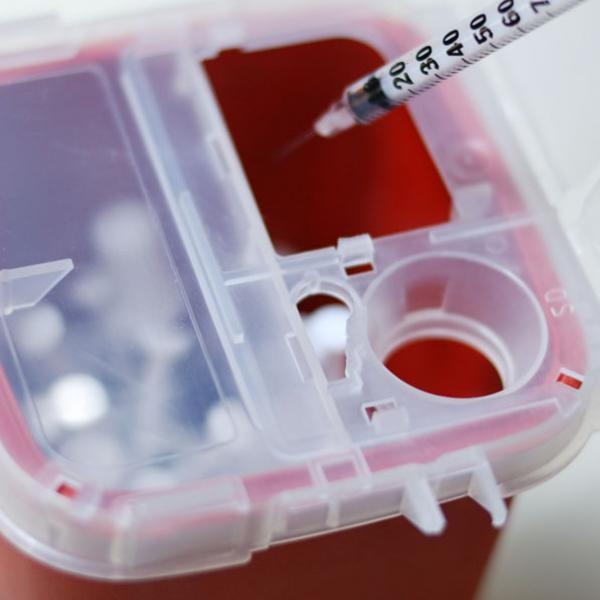 A 2018 study led by researchers at Johns Hopkins Bloomberg School of Public Health found that about 4 in 10 adults in the United States (39%) support legalizing syringe exchange programs in their communities.3 Better understanding public opinion can help communities gauge local support before developing a needle exchange program.

The Kentucky Health Issues Poll, which is sponsored by Interact for Health and the Foundation for a Healthy Kentucky, asked Kentucky adults about their familiarity with and opinions regarding needle exchange programs.

More than half familiar with needle exchange programs

Opinions about needle exchanges varied by age, education level and the type of community in which adults live. Kentucky adults ages 18 to 29 (57%) were more likely than those older than 65 (39%) to favor needle exchange programs. About 5 in 10 adults ages 30 to 64 favored such programs (51%).

Support for needle exchange programs increased with education levels. Kentucky adults with a college degree (65%) were more likely to favor such programs than those with a high school diploma (42%) or less (31%).

Kentucky adults who live in urban areas (59%) were more likely than residents of suburban (49%) or rural communities (42%) to favor needle exchange programs.

1.  Kentucky Cabinet for Health and Family Services: Department for Public Health. (2017) HIV Prevention Program. Retrieved from https://bit.ly/2UtCZX7.
2. Aspinall, E.J., Nambiar, D., Goldberg, D.J., Hickman, M., Weir, A., Van Velzen, E., Palmateer, N., Doyle, J.S., Hellard, M.E., Hutchinson, S.J. (2014). Are needle and syringe programmes associated with a reduction in HIV transmission among people who inject drugs: A systematic review and meta-analysis. Int J Epidemiology 43(1): 235-48.
3. McGinty, E.E., Barry, C.L., Stone, E.M., Niederdeppe, J., Kennedy-Hendricks, A., Linden, S., & Sherman, S. (2018). Public support for safe consumption sites and syringe services programs to combat the opioid epidemic. Preventive Medicine 111: 73-77.
4. KHIP asked, “First, I’d like to ask you about needle exchange programs offering clean needles to IV drug users in exchange for used needles. How familiar are you with needle exchange programs which have been implemented in a number of cities across the Commonwealth…?”
5. KHIP asked, “Some people favor needle exchange programs because they feel these programs help reduce the spread of AIDS. Others oppose needle exchange programs because they feel these programs send the message that it’s okay to use illegal drugs. What about you… do you favor or oppose needle exchange programs?”